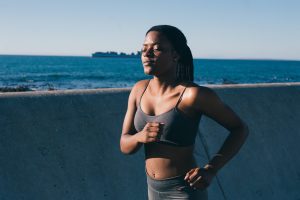 If you’ve ever worked out hard or gone on a day’s run, you probably feel fabulous, and maybe even relaxed when you’re done. There are several reasons exercising, like running, can feel so good. Running can help relieve stress, which is the first reason. When you’re under stress, your body creates hormones that make changes so you can run away or fight. When you run, you burn off those hormones and your body goes back to a relaxed state. The changes were important for early man, when stressful situations were life threatening. That’s normally not the case today.

The release of cortisol is slowed when you run.

Slowing that release slows the feeling of stress that can create chronic changes. It simply feels good to have the heavy weight of stress lifted off your shoulders as you run. Not only is that good for your mental health, it’s good for your body, too. Cortisol, a stress hormone, contributes to the accumulation of abdominal fat.

If you haven’t heard of the runner’s high before, you’re learning about it now. It is a natural high that is often attributed to the release of endorphins like dopamine, but in reality, comes from a different biochemical substance. Scientists now believe it comes from endocannabinoids, which has a chemical structure similar to cannabis, but produced by the body, not by a plant. It can cause that after run relaxed feeling.

Running increases circulation, sending oxygen and nutrient laden blood to all parts of the body, including the brain.

That deep breathing you do when you run and the increased circulation give you both immediate benefits and long term benefits. It can boost your energy level, while also trigger new blood vessels to grow in the brain. Neurogenesis, the process of producing new brain cells occurs after exercise, such as a run. A run acts like an anti-depressant to improve not only the brain and its performance, but also your mood.

For more information, contact us today at Reggie C Fitness