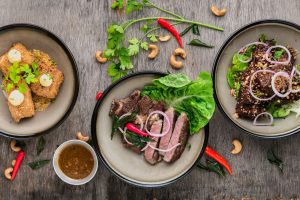 If you want to eat like a caveman, then you’re ready for the paleo diet. Paleo stands for paleolithic, which was the early age of the stone age, when caveman walked the earth. The Paleo diet has fresh fruits and vegetables, meat, eggs and nuts, but no grain. Many people feel it’s closer to the way caveman ate and can help you to lose weight and become healthier. It’s a pre-agriculture society. There was no artificial or processed food available. In other words, cavemen never had a coke or quickie burger.

A Paleo diet is a whole food diet.

The Paleo diet is all about eating whole foods without much processing. After all, that would be how the caveman ate. There is one difference between a Paleo diet and healthy eating guidelines is that when you eat healthy, you can include grains with your meals. Some of the foods the Paleo diet eliminates are actually healthy. It eliminates all grains, legumes such as peanuts, beans and soy. Dairy is eliminated, so milk, cheese and other products like yogurt disappear with it. You won’t be eating starchy vegetables on a paleo diet, such as potatoes and corn.

A strict Paleo diet makes it far more difficult to eat in public restaurants or even visit others for a dinner together. If you’re a vegetarian or vegan, it makes it almost impossible to have a well balanced diet. Vegan’s primary source of protein comes from beans and legumes, which aren’t allowed on a Paleo diet. That doesn’t mean it’s impossible, just a lot tougher. Vegans have to depend on nuts and seeds for protein. That can mean eating a whole lot of nut butter! A Paleo diet also makes it harder to get carbs for energy, so if you’re an athlete who does tough workouts, you’ll have to work harder to get the energy you need before working out hard.

There are good things about the Paleo diet.

One of the best things about a Paleo diet is weight loss. Eating like a caveman is also easier in some ways. It’s far easier to identify the foods that you can eat. The rules are simple and not very complicated. There are limited foods from which to select. There’s no label reading, since processed foods are totally out of the picture. When you consider that most fresh fruits and vegetables are anti-inflammatory, you’ll be improving your health, too.