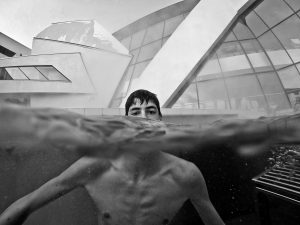 If you though only women were prone to eating disorders, think again. Today, the rise in male eating disorders is disturbing. In fact, one in every three people with an eating disorder is a male. It occurs for the some of the same reasons female eating disorders occur, but many have the added burden of trying to hide their disorder and avoiding seeking help, since it’s often thought of as primarily a “problem faced by women, not men.”The type of disorders are the same and include binge-eating disorder, anorexia and bulimia. These, especially anorexia, can affect males as young as 8.

Just like their female counterparts, it starts with societies vision of the perfect body image.

You don’t find overweight and flabby men who flaunt sex-appeal and attractiveness in commercials. Check out GI Joe action figures. They’re buff with the perfect V and if they were human, would have no body fat. Little boys look at the images presented by society as the ideal physique and hope to achieve those unattainable results. It’s similar to young girls idealizing the bodies of Barbie dolls, who would have a bust line that’s 39 inches, a waist that’s 18 inches, hips that were 33 inches, a shoe size of three and she’d be 5’9″ in height if you used the same proportions of her body.

Men have another disorder that’s more a male thing.

Men who have eating disorders may also have an unsatisfied need to develop huge muscles. I use the term unsatisfied, because no matter how buff they are, it’s never enough. They may even see themselves as skinny or underweight. This dysfunction is called muscle dysmorphia and is seem often in body builders. It reflects a compulsion to build muscle tissue, spurring the individual to spend hours at the gym bulking up, eating an odd selection of foods specifically to build muscles, spending far too much on supplements and even taking dangerous substances to enhance muscle building, such as steroids.

It’s not just how those with eating disorders view the media hype that causes these problems.

While media hype may put the “perfect” body in front of men, there’s more going on than just blindly following society’s perception of perfection. Many of those suffering from it have other issues, like lower self-esteem and feeling out of control and helpless. Controlling their weight and the way they look may be their way of regaining control of their life. Perfectionism tends to be a trait that these men have in common.