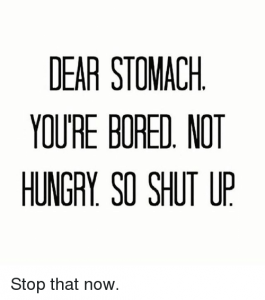 Boredom brings with it the urge for sugary treats or crunchy, salty snacks, but seldom the urge to eat a bowl of steamed veggies or an apple. That’s because people often eat when they’re bored to fill that empty gap and get a feeling of satisfaction and enjoyment. The empty gap isn’t in the stomach, but in the situation. If you’re bored, you’re not involved in anything that’s productive, exciting or rewarding, so you’re not getting any feedback from your brain in the form of dopamine, the feel good hormone our brain gives us as a reward. Instead, you turn to food to create that dopamine and not healthy food, but food associated with good times and enjoyment, like sweet sugary treats. You can stay healthy when you’re bored if you learn to identify emotional eating and replace it with other behavior.

Know what causes those binge snacks at night.

You probably don’t binge on snacks all the time. Maybe it’s just at night when you’re alone chilling and watching whatever’s on TV or at family get-togethers when you’ve told Aunt Grace for the hundredth time you’re living in the city and have a great job. Both are situations where you would love a feel good snack just for “something to do that feels good!” That’s when you reach for that Danish or the cake even though your stomach tells you that you’re full. That’s boredom eating.

Not everyone can eat only when they’re hungry. Too many emotions mix with the act of eating. Most of us need a cue. If boredom or other emotions mix into eating patterns, causing you to chronically overeat, the best way to stop the bingeing is to eat on schedule. Let the clock be your guide or at least close to it. Plan meals and snacks and stick to the schedule until it becomes second nature. Not only will your body tell you when you’re hungry, you won’t end up ravenous because you skipped a meal and overeat.

Make sure you have healthy foods in your diet.

Healthy foods include more than just veggies and fruit. You should also have a source of healthy protein and healthy fat. Both will keep you feeling fuller longer and satisfy hunger. Don’t be shocked about the healthy fat. Some fat is good and it keeps you feeling full. Some examples of foods with healthy fat are cheese, hard boiled eggs, avocados and even dark chocolate.