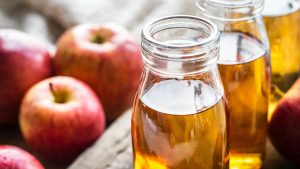 If you’ve read or heard about the apple cider vinegar drink that’s miraculously supposed to help you lose weight without effort, you’re probably excited to try it. You probably won’t have the brilliant success that the websites, friend or video promises. Apple cider vinegar can help you shed pounds, but not by just drinking it in water. In fact, one study showed it had no weight loss effect when consumed alone, without consuming a meal.

Carol Johnston, a dietitian, studied the effects of acetic acid, the primary component of apple cider vinegar, on the blood sugar of prediabetics. In her study, she found that it aided in lowering blood glucose levels in not only prediabetics, but also type 2 diabetics with insulin-resistance and the healthy control group. It was the most impressive with the insulin-resistant group and stayed lower. It did that by blocking starch absorption. By adding vinegar when the subject ate starch, it lowered glucose, but not by just drinking apple cider vinegar and water.

Another study showed that it might help you shed those extra pounds.

In this study, 175 healthy Japanese subjects that were overweight were studied for twelve weeks. The study showed the apple cider actually helped to reduce weight, lower visceral fat, reduce waist measurements and body mass, while also lowering triglyceride levels. However, the amount of weight lost was only about 1/3 pound per week. That doesn’t really make you want to stand up and holler!

Use apple cider vinegar with a healthy diet.

Even though the study showed some slight weight loss, consider what it could do to boost your healthy eating weight loss plan. You don’t have to drink a glass of water with apple cider vinegar or suck down a couple of teaspoons with each meal. You can incorporate it into your meals in more natural ways, like using it on salad or as a marinade or sauce for fish, poultry or meat.